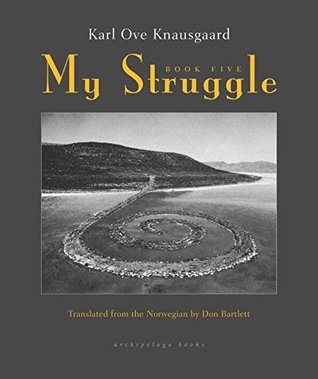 Four books into the series, I was no stranger to the prolonged moments of slowness and inaction that periodically crop up in My Struggle. It’s to be expected from a project that aims to document seemingly all of a person’s life, and one of Knausgaard’s great accomplishments is keeping readers engaged and clamoring for more, even when the narrative drags. Book Five is no exception, though I did find it more trying than the previous installments. Here we trace twenty-something Karl Ove’s attempts at forging a writing life, which, for the first 500 pages or so, is mostly made up of bouts of acute self-consciousness that end in drunken escapades. Racked with guilt after each binge, our hero refuses even the slightest efforts at remedying the situation. It’s this recursiveness that makes Book Five a bit of a slog and, for me, induces a surplus of annoyance.

Yet, despite the many portions that try my patience or cause my interest to drift, Knausgaard always manages to reel me back in with insightful, beautiful passages like this:

Perhaps in a way because dialects grew from the countryside around them, the style of speaking originated just there, in that particular valley, where the pronunciation of one word, for example, had come into existence with the great oak tree, which was now almost a thousand years old, the pronunciation of another with the terrain being cleared and the ancient stone wall built. In other areas there were other words and other oak trees, fields, and stone walls. (p. 530)

Or this recollection from childhood:

The big square cooler bag Grandma would life out of the trunk. The dry moss in the cracks of the stone wall, all the smells there, some of them dark and moldy, if you lifted a stone, it could be dame underneath and tiny insects would dart in all directions. The same was true of the stiff grass, it smelled dry and hot, but beneath it, if you dug down a little, there were quite different smells with more presence and depth, akin to decay. (p. 585)

The final 150 pages, which detail Karl Ove’s first marriage and return us to the death of his father, are more than worth the price of admission. We know all too well what happens to his dad, as this is the core subject of Book One. By now, though, we have gained a completely different perspective, one deepened and colored by the thousands of pages in the books that follow. Being brought back to where we began is a lot like cresting a hill to glimpse down on a city or town you know and love but have been away from for a long time. You approach it with an utterly different understanding. It’s a moving, powerful experience.